My goal is to run a half marathon.  After that I may decide I never want to run again, or I may challenge myself further with a marathon or even a half Ironman.  I won’t know until I get there. But completing a half marathon is within the realm of possibility and something I desire to do.

HOW IT ALL STARTED

I had recently lost about 15 lbs through diet and walking  – but I knew it was time to step up my game because I had A LOT more to lose!  So, I bought a squeaky new gym membership.  On my first visit I warmed up on the elliptical and did some strength training, then hopped on the treadmill to do some more cardio.  I started  walking at 3 mph.  After I tinkered with the incline a little, then leveled myself off again and upped the speed to 3.5 mph.  I wondered to myself how a little jogging might go.  Then, I started to pick up the pace until I was jogging at 5 mph.

I told myself I would jog at least a tenth of a mile no matter how tough it was.  And it was tough.  I hadn’t done any type of running in the past two decades.  Once I got through it I walked again until my heart stopped beating out of my chest.  It was a wake-up call as to how out of shape I was.

I didn’t want to believe it was that bad so I was determined to run at least a quarter mile.  I increased my pace to 5 mph and jogged a quarter mile.  Huffing and puffing afterwards, I walked until I caught my breath.  Despite feeling discouraged by how far I could run without becoming breathless and wanting to stop, I felt euphoric.  It was enough effort for the day, but I was looking forward to the next day to try again!

Over the next couple of days I began to run intervals, a 1/4 mile walking and then a 1/4 mile running until I reached the distance of a mile.  I began to keep track of how long it took to complete a mile.  My first numbers were in the 16 minute range, gradually decreasing to 15 minutes per mile. I then began to run longer, and take shorter walking breaks.  I did this until I was consistently completing a mile in 14 minutes or less.  My goal was to constantly shave off a couple of seconds from my personal best to date.

WORKING TOWARDS A 5K

I then began to think about completing a 5 km distance.  I knew to get there I would have to start working on my speed and stamina.  So, I increased my running speed to 6 mph and my walking speed to 3.5 mph.  Ultimately though, I found that I ran out of gas too quickly when I ran at this pace.  I needed more walking breaks and I felt that running at this speed – given the weight I was at and my overall fitness – was unsustainable.

I scaled the running back to 5 mph and the walking remained at 3.5 mph and at this speed I was able to run further and further without stopping until I was capable of going a mile before I needed a short walking break.  From there I worked my way up – completing 2 miles per run, then 2.5, until finally I was consistently running 3.1 miles – or 5 km.

I can’t say that running 5 km really got easier – every time required effort.  I had mental arguments with myself.  My motivated side telling myself:  “I can run another 1/2 mile before my next walking break.”  My tired, defeated side telling myself: “I couldn’t possible run another step.”  “Don’t you want to stop to rub that bead of sweat off your cheek?”  “Your stomach feels a little queasy – better stop.”  “Your shins are aching.”  And while you’re running, the arguments against always seem a lot more persuasive than the arguments to keep going.

COMMITTING TO A 5K 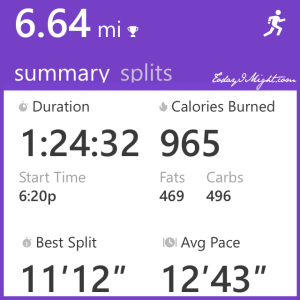 Once I was consistently completing the 5 km distance at the gym I signed up for a 5 km race in my neighborhood.  I signed up 4 weeks before the event.  In the meantime, back at the gym, I started thinking beyond the 5 km distance to the 10 km.  With this in mind my runs became longer – 4 miles, 5 miles, 6 miles and then finally 6.2 miles or 10 km. Still with walking breaks here and there – but always with the goal of completing the distance in 90 minutes or less.

After a few 10Ks were under my belt, I began to increase my mileage again.  The ultimate goal being 13.1 miles – the half marathon distance.  I got to 7 miles, then 8, then 9.  After the third time running 9 miles I came home exhausted and was greeted by two very excited puppies.  The dogs started playing in the hallway and as I tried to pass them one plowed himself into the back of my knee causing it to bend inward.  My left knee buckled and I doubled over in instant pain.

A major set back – to say the least.  I spent the next couple of days resting, icing, compressing and elevating the knee.  It began to feel a little better by the second week so I started to walk on it more – then run for short spurts based on some recommendations on how to return to running.

PREPARING FOR THE 5K

The 5 km I had signed up for was getting closer, and despite my knee, I wanted to complete it.  I also knew that running outdoors would be a different kettle of fish than on a treadmill so I got a map of the course and took a practice run.  It took me 42 minutes to complete it with the bum knee.  It was early spring and the weather was wet and icy.  There were also steep inclines which were unexpected.

I decided buying a brace for my knee might be in order to help stabilize it during the runs.  I tried the course a second time with the brace, on a day when the weather wasn’t quite as bad as the first, and finished the distance in 38 minutes.  A couple of days later I completed a third trial run with similar results and felt ready for race day. 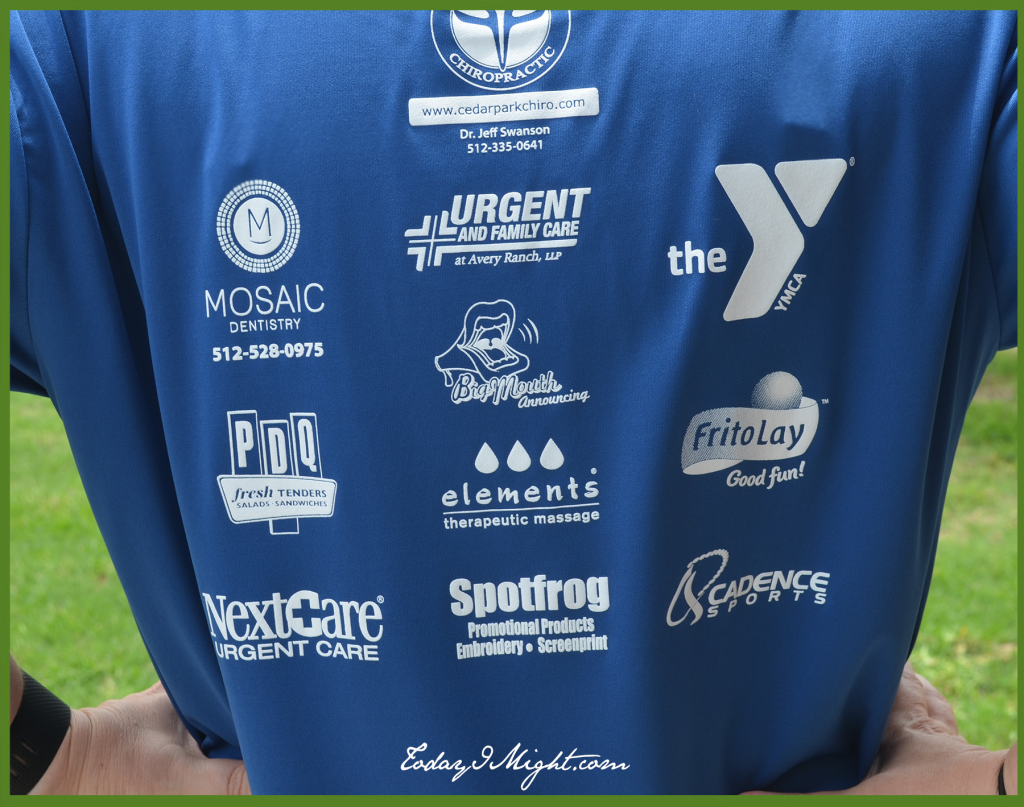 On race day the temperature outside hovered at freezing and it was drizzly.  The race organizers warned of icy patches along the course.  Only about half of the 150 participants who had signed up for the event showed up on the day.  After playing the national anthem, we took our marks and the race began.  I ran the first mile without stopping.  The second mile came with some walking breaks.  Likewise the third.  I completed the event at 40:10 minutes.  I was disappointed to not be under 40, but given the weather and my throbbing knee, was happy to have completed it.  My first race was under my belt.

BACK TO THE DRAWING BOARD

Realizing I had pushed my knee too far too soon I began taking longer breaks between runs and spending the interim time cross-training.  I tried swimming, biking, elliptical and rowing.  The rowing seemed the best fit for me – still challenging me from a cardiovascular point of view, with very little impact to my knee.  This has been my approach for the past couple of months since the 5K race – I am back up to running 6.2 miles once a week and training with 4-5 mile shorter runs a few times a week.  It’s getting easier as I drop weight – I’m down a further 40 lbs since I added running to my activities.  My eye is still on the half-marathon.  It will just take a little longer to get there than I had hoped.

SOME THINGS THAT HELPED ALONG THE WAY

The beauty of running is you can do it anywhere, but a lot of my progress was made on the treadmill at my local 24 Hour Fitness.  And, you have to have a good pair of supportive shoes.  I started with a solid pair of Brooks – but upgraded to ASICS Women’s GEL-Nimbus 15 Running Shoes

that were insanely comfortable.  Listening to great music kept me going.  I originally packed my Spotify playlist with fast-moving, heart-pumpers.  Funnily enough, I ended up with a completely different, more mellow playlist in the end.  The slower songs remind me to pace myself, relax and breath deeply.  When hitting the road outside, I tucked my phone and keys into a FlipBelt

which was very handy.  And finally, I kept track of it all – heart rate, calories, steps, pace and the like with my Microsoft Band.

I’ll let you know when I’m ready for my half-marathon, but in the meantime I’ll be out there on the road – doing the miles and smiling the whole way!