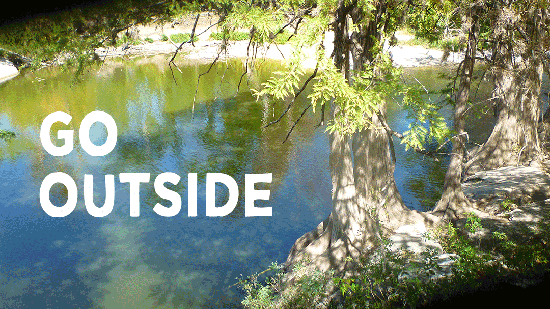 With every new generation, people are spending more and more time indoors. But, the benefits of being outside in nature are many.  Communing with nature, whether it be for a few minutes or a few days can have a profound impact on your happiness and well being.  Here are six reasons why you should go outside:

A Dutch study found that those living within one kilometer of a green space experienced less depression and anxiety.  Also a study conducted at the University of Michigan found that outdoor recreation positively impacted Veterans’ psychological well-being. While researchers at Chonnam National University found increased activity in the anterior cingulate gyrus and basal ganglia, respectively, areas tied to happy memories and a positive outlook.  Just think about how you feel when you’re outside exercising!  I know I am happier and less focused on myself.

2.  Being in the Outdoors Decreases Boredom and Increases Concentration:

In The Biophilia Hypothesis, the authors write that being in nature aids in learning, alertness and inquisitiveness.  Other studies suggest that being “unplugged” in nature allows us to focus on one thing, rather than multi-tasking.  This focused attention prevents boredom.

A Study out of Scotland found that people found their to-do list to be more manageable when walking in a rural environment rather than downtown. Certainly an important factor in managing stress is feeling that one’s responsibilities are manageable.  Many studies have found that being outdoors lowers cortisol levels and reduces blood pressure.  In addition, when polled, people reported feeling less stressed when they lived near a green space as opposed to a city-setting.

Over the past few decades, people have been spending more time indoors.  During that same period of time the incidence of obesity has risen.  Coincidence?  Studies have shown that when exercising outdoors the intensity of the exercise increased vs. exercising indoors.  People also reported that the perceived level of exertion was less when the activity took place outside and they had a more positive outlook on their efforts.  It’s not a stretch to conclude that these factors will lead to greater success in weight loss.  Also, given the above two benefits, it is also likely that people will be more physically active if their mood is elevated and they are less bored with the activity.

Spending 10-15 minutes outside, a couple of times a week is generally considered sufficient time for your body to produce Vitamin D.  Vitamin D is necessary for good bone health, and is also thought to contribute to weight, mood and regulating blood pressure.   A deficiency of the vitamin can affect glucose and insulin levels in the body and may contribute to weight gain. When Vitamin D levels decrease in the body, serotonin levels also fall, which in turn can lead to depression.  Although fortified milk, cold-water fish and eggs are dietary sources for Vitamin D, it is widely believed that sunlight is the best source.

6.  Being Out in the Environment Boosts Immunity:

So, if you needed an excuse to get outside more, you now have 6 excellent reasons to do so!  You won’t regret it!