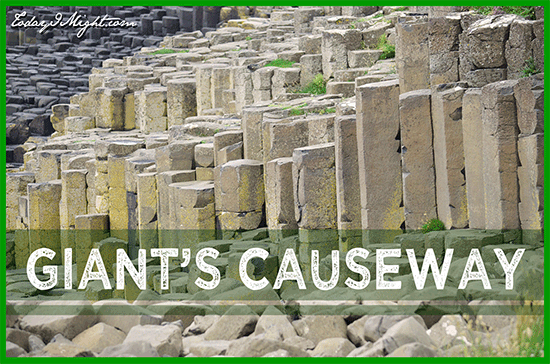 On the Northern Coast of Ireland there is a marvel of geology that everyone travelling to the country owes themselves to visit. The Giant’s Causeway.  The collection of some odd 40,000 basalt, often hexagonal columns is other-worldly. It’s easy to see why this Unesco (United Nations Educational, Scientific and Cultural Organization) World Heritage Site’s history is steeped in fairy tale. 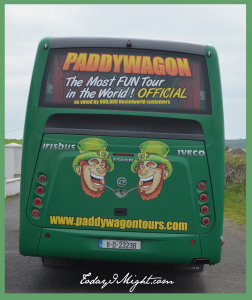 We took a bus tour from where we were staying near Dublin up to Northern Ireland to see Carrick-A-Rede and the Giant’s Causeway. The tour was operated by Paddywagon Tours and our driver/guide was a local character that made the drive north enjoyable despite it’s length.

The tour stopped first at Carrick-A-Rede, and then continued on to the highlight of the journey – The Giant’s Causeway.  Anticipation builds as you walk down the hill towards the coastline.  The audio guide points out a rocky figure that resembles a camel across a small inlet.

As you round the bend in the road to the right, the causeway itself appears in the distance.  As you start to near the rocky formations you realize it is like nothing you have ever seen before and you can’t help but be in awe of the beauty of nature.

How It Got It’s Name

The story goes that a giant by the name of Finn MacCool was challenged by another giant, Benandonner of Scotland.  In order to meet with the Scottish giant, Finn built a causeway across the sea.  As he approaches Scotland he realizes that Benandonner is much bigger than anticipated so he hurries back to Ireland.  Once back in Ireland his wife dresses him like a baby to hide him from Benandonner.  When Benandonner sees the baby, he figures his father Finn must be huge so he scurries back to Scotland, destroying the causeway in his wake.

The columns themselves seem to take on different characteristics in different areas of the site, varying in size, color, and texture. It was fun to step from column to column, reminiscent of a child playing hopscotch.  Tourists have complete unrestricted access to the columns from the hills on shore to the sea.

The basalt columns were formed when volcanic activity created molten basalt, which cooled and fractured in such a way as to form these unique hexagonal columns.  Some of the columns can also be seen across the sea in Scotland as well.

This natural wonder of the world was a pleasure to visit.  Although my husband felt it was “smaller than he thought it would be”, I wouldn’t hesitate to recommend it.  He’s also the  guy that thought Niagara Falls was “meh”.